How does the book work?

You tear out one of the blank boards from the pad at the start of the book, and pair it up with any of the rule pages at the end: this gives the basic structure for a game. Players then decide exactly what the game is about, and work together to add squares and doodles to the board. You can add to or change the overarching rules, bringing in bits and pieces to use as whatever playing pieces are needed, and when you agree that the game looks ready to play... you play it!

Why is this called "snaddering"?

It's a word we made up to make it easier to talk about the process of making a game in this way ("let's snadder a game about ghosts robbing a bank"), to distinguish it conversationally from other ways of making games.

As a word it's a portmanteau of snakes and ladders, reflecting both the simplest form of these games, and something of a metaphor for the process - the solid, scaffolding structure of the game's rules and board, and the flexible, freeform chaos of the doodles and squares.

Is this book suitable for children?

As a book it's written for ages roughly 12 and up. Anyone reading at that level will be able to make and play their own games, trying out the various rules and ideas that the book describes, with no help from adults.

Younger children can join in with a mixed-age group who are making a game, or a child can make a game with assistance: snaddering is a collaborative process of suggestions and doodling, and older players can help to implement ideas from the younger ones, to make a game they can all play together. There's a full section in the book that highlights some rules which work particularly well with younger players in the group, such as a cooperative game where everyone is working together to save the day.

Younger players are also free to ignore the rules section and doodle their own simple snake-and-ladder style games on the blank boards, adding their own colours and drawings to the background artwork. They can always get into some of the suggested rules later on with help from an older reader, or just make up whatever they feel like making up.

Is this book suitable for an adult gaming group? 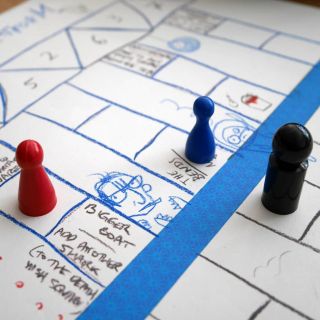 Absolutely. Snaddering has a game jam constrained-design kind of feel to it, where you're making a game based on an agreed theme that nobody has prepared for ("stowaways"), or from the book's Random Theme Generator ("wizards / in prison / trying to unmask the traitor"). You get to exercise your game design muscles, and make something that's fun and strategic enough to be worth playing through at least once, maybe with the germ of an idea you'll want to develop further.

Snaddering also provides an endpoint to all those tailed-off conversations about how you wish you could play a boardgame of a particular film or TV series: you can make one yourself in half an hour. Pick a board that matches its genre, or doodle one from scratch, and select or invent a few general game mechanics. Fill the board squares with references to the source material that build on those mechanics (the easy humour of "Renault orders the bar closed: miss a turn!" pseudo-game spreads in magazines, but applied to some actual card or token mechanics instead of just going back five spaces or rolling again), and you've got something you can play. It won't win the Spiel des Jahres, but it'll be satisfying and tactical and a bit surprising, with some narrative about who won and how.

The snaddering process can also be approached competitively, like a game of Nomic. Players follow a formal process of proposal-and-acceptance to quickly assemble the rules and board for a game, and when everyone has agreed that it looks fair (or rather, that they privately think they stand a better-than-evens chance of winning it because of something they've noticed or snuck in), they play it out to see what happens. Played like this, snaddering can be a game of surprise loopholes, clever square combos and booby-trapped misdirection.

What do I need to make the games?

The bare minimum is a sheet of paper (either a board from the book, or a track you've drawn from scratch), a pen or pencil, and some objects to represent the players - coins, buttons, pieces from other games, or whatever you have to hand.

Optionally you might also want a six-sided die, a few other counters to collect or track things, and maybe some blank index cards. The book includes a sheet of cut-out paper tokens if you need them, and also gives several ways to play without using dice.

How long does it take to make a game?

Are these all roll-and-move dice games?

No! The boards in the book are all branching tracks with effects written on some of the squares, but there are lots of ways to play a game on a board like that which don't involve rolling any dice, and the book suggests several, along with a few rules which can mitigate the worst aspects of roll-and-move. You can play the whole book without using any dice at all. 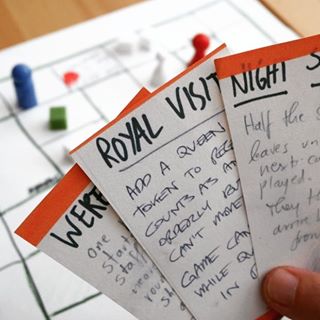 If you use the rule pages which replace the dice with a fixed hand of cards, an expendable fuel resource, or unlimited but unidirectional jumps, the game instantly becomes an action selection game instead, where your position on the board determines the options available to you. You can add action cards and other mechanics so that players have options other than a regular move each turn, and there's even a rule for making a worker placement game.

But, by themselves, the map-style boards in the book add a level of decision-making beyond the simple loop of Monopoly. Instead of progressing along a single fixed track, players can move in any direction: if you roll a six, there might be four or five different squares you could choose to move to, some with effects written on them, some with rival pawns to approach or avoid, and others simply on the way to a better, distant square.

Will the games I make be any good?

That's up to you! It'll vary from game to game, but you'll always get a lot of extra enjoyment from the fact that each game is something you've just made with your friends - that it's full of your own jokes and doodles and references, and that you might even beat someone by landing on a square that they wrote themselves. Even the bad or broken games can be a satisfying challenge, with every player starting from the same position and racing to work out the quickest route to victory.

The snaddering experience is generally about quickly making a game and playing it once (maybe twice if you want to fix something or have a rematch), rather than designing a masterpiece that you'll want to box up and keep on the shelf. But who knows what you'll make.

Where can I buy the book?

Any good bookshop, or online from sites including Amazon UK, Amazon US, Barnes & Noble, Foyles, Hive UK, The Ludoquist and Waterstones.